21jun12:00GUIDED EXHIBITION BY THE PHOTOGRAPHER JUDITH PRATBoko Haram, a war against them12:00 Exhibition Hall of the Kiosco Alfonso

“Boko Haram, a war against them” Although Nigeria is Africa’s leading power, the economic inequity and scarce redistribution of wealth that makes the vast majority of the population feel alienated from

“Boko Haram, a war against them”

Although Nigeria is Africa’s leading power, the economic inequity and scarce redistribution of wealth that makes the vast majority of the population feel alienated from the profits derived from the sale of oil and other economic sectors has not been overcome. This is something suffered especially by the population of the north, which has perceived unequal treatment with respect to the oil states of the south.

This discriminatory treatment, coupled with the lack of opportunities, has created a significant climate of discontent among the younger generations in northern Nigeria, who face an uncertain and bleak future.

This economic and social context allows Boko Haram to use this discontent from the outset to gain followers for his new strategy: to leave preaching as a tool for change in the background and focus on violent struggle.

The figures detail the size and scope of the deadly act of the terrorist group, responsible for 50,000 murders, around 2.7 million displaced persons and refugees throughout the region, or 10,000 women kidnapped in the last 3 years. In addition, the conflict has resulted in 5.1 million people currently suffering serious food shortages in northeastern Nigeria and around 50,000 on the brink of famine in the Lake Chad region.

The devastating consequences of conflict and displacement are multiplying for women. Family separation increases the risk of exposure to new damage and insecurities for them, who find their opportunities to survive, escape poverty or not be subjected to further violence much more limited.

The specific violence that is being used against women as a weapon of war and as a means of destabilizing society cannot be ignored. Thus we see that women are enduring the general violence of conflict and sexual violence used as a weapon of war. The woman’s body is used as a battlefield where power and the capacity for domination are exhibited.

For a long time the government denied the existence of kidnappings of women and girls. But the reality is that the abductions have not stopped and the fate of the women abducted by Boko Haram is to become the group’s sexual slaves. They are forced to marry their captors, they are raped and many have had children with them. Those who manage to flee or have been rescued face the stigma attached to them and their children.

In addition, abducted women and girls are forced by the group to immolate themselves in crowded places. To carry out these kinds of actions, they often use those abducted girls who resist the sexual claims of the group members.

Six out of ten women say they have experienced one or more forms of gender-based violence in the region. Abuses against them have skyrocketed, especially among the displaced population itself.

Girls and adolescents aged 10 to 19 are particularly at risk from mass displacement and the damage caused by material deprivation in their families. The heads of families, unable to support their daughters, often choose to marry them early.

Girls’ right to education is also seriously violated. In recent years, many have been forced to leave school by their parents for fear of being abducted, as Boko Haram denies education for women.

On the other hand, abandoning everything in order to flee means losing one’s means of subsistence. This means, in an eminently agrarian zone, losing land and livestock, highly feminized productive sectors. Women have had to abandon their work in the countryside, initially because of the risk of kidnapping involved in their work in areas far from the population centres, later because they fled to the cities or to the displaced persons’ camps.

In short, women in northern Nigeria face a multitude of dangers and violence arising from the conflict on a daily basis. However, this photographic work speaks of women who reveal themselves to the role of victims that their executioners had reserved for them, surviving women who struggle to get ahead and are the key to overcoming the conflict and for society to evolve. 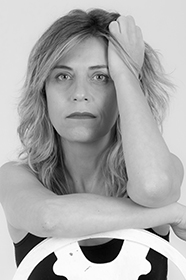 Exhibition Hall of the Kiosco Alfonso