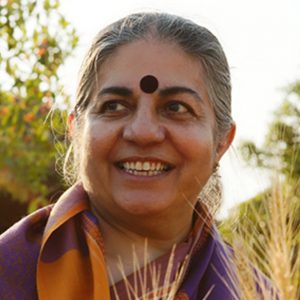 Dr. Vandana Shiva is trained as a Physicist and did her Ph.D. on the subject “Hidden Variables and Non-locality in Quantum Theory” from the University of Western Ontario in Canada.

In 1982, she founded an independent institute, the Research Foundation for Science, Technology and Ecology in Dehra Dun dedicated to high quality and independent research to address the most significant ecological and social issues of our times, in close partnership with local communities and social movements.

In 1991, she founded Navdanya, a national movement to protect the diversity and integrity of living resources, especially native seed, the promotion of organic farming and fair trade. In 2004 she started Bija Vidyapeeth, an international college for sustainable living in Doon Valley in collaboration with Schumacher College, U.K.Dr. Shiva combines the sharp intellectual enquiry with courageous activism. Time Magazine identified Dr. Shiva as an environmental “hero” in 2003 and Asia Week has called her one of the five most powerful communicators of Asia. Forbes magazine in November 2010 has identified Dr. Vandana Shiva as one of the top Seven most Powerful Women on the Globe.

Has received honorary Doctorates from University of Paris, University of Western Ontario, University of Oslo and Connecticut College, University of Guelph. Among her many awards are the Alternative Nobel Prize (Right Livelihood Award, 1993), Order of the Golden Ark, Global 500 Award of UN and Earth Day International Award. 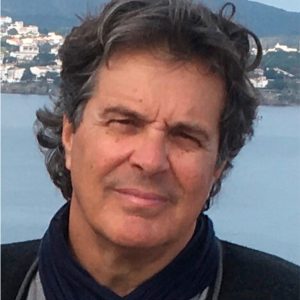 International correspondent for 35 years, most of them in Moscow and Beijing for the newspaper La Vanguardia. He was also correspondent of Die Tageszeitung and itinerant correspondent in Eastern Europe (1983-1987).

He has been an occasional contributor to the Spanish edition of Le Monde Diplomatique and the Beijing magazine DuShu, as well as author of several books on Russia and China.

A contributor to Ctxt under the heading ” Imperios Combatientes” (Combatant Empires), he maintains the blog rafaelpoch.com. 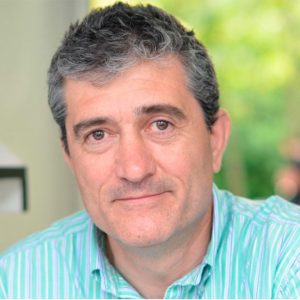 Guillermo Fesser (Madrid, 1960), began as a journalist in the innovative radio program Gomaespuma, which, using humor to tell the news, remained on the air for more than 20 years and reached a million daily followers. Together with his brother, film director Javier Fesser, he has written screenplays for renowned feature films, such as The Miracle of P. Tinto, and directed exciting films such as Cándida and The Invisible Monster. Fesser is the author of several successful books, among them, the biography of his assistant, Candida: cuando Dios aprieta, ahoga pero bien; or the story about daily life in the United States, One Hundred Miles from Manhattan. His children’s books, Ruedas y el enigma del Campamento MT and Get to know Bernardo de Gálvez are regularly read in the classrooms of many schools in Spain and the US.

Fesser currently lives in Rhinebeck, New York, where he works as a correspondent for the television program El Intermedio and directs, together with his college friend and inseparable microphone partner, Juan Luis Cano, the Gomaespuma Foundation. Under the slogan “Pequeños proyectos pero que se hagan” (Small Projects, but that Must Be Done), the foundation is dedicated to educating the most disadvantaged children with a smile and today has projects in Ukraine, Sri Lanka, the Philippines, Senegal, Nicaragua and Spain.